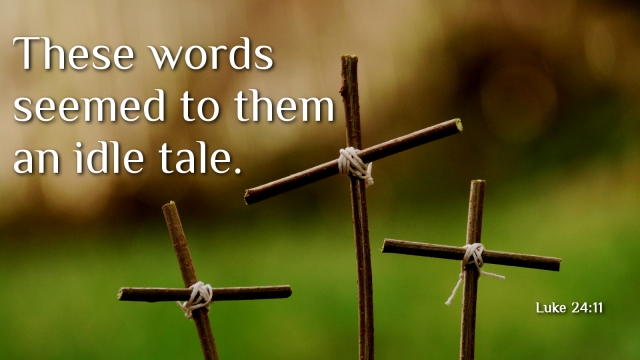 Sometimes seeing isn’t always believing. Eyes have been known to play tricks. But when seeing is combined with feeling and hearing, one should consider the possibility that what has been seen, heard and felt is true. Such was not always the case following Jesus’ resurrection.

Perhaps we should not be so hard on the eleven remaining disciples, people often refuse to believe and provide alternatives to the resurrection. Even some buoyed by years of scholarship fabricate contradicting theories. Some will go to great lengths to fabricate a story. They say things such as , Jesus was revived and taken away, someone took his place on the cross, he didn’t really die. In the end they still have the same problem. Moses and the prophets all point to Jesus and the empty tomb.

Prayer: O Lord, through the eyes of faith and the truth of your Word, we believe.  Amen.