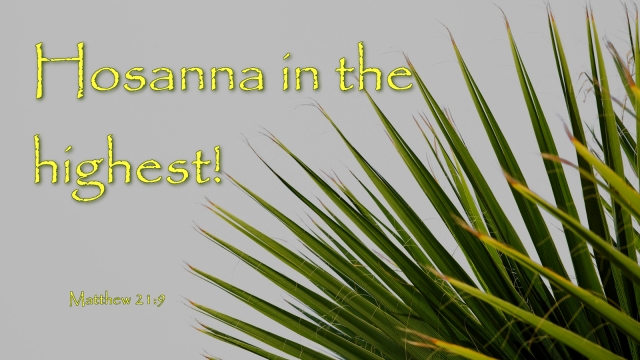 As Jesus entered the city of Jerusalem, crowds of people greeted him as they would greet their king. They waved palm branches in the air, threw down their cloaks to cover his path, all the while shouting “Hosanna” (which means “save us”). On that day, no one could possibly know what the next few days would hold.

The crowds that acclaimed him king would soon turn against him. His own disciple would betray him. He would be arrested and the rest of his followers would abandon him. Betrayed by a friend’s kiss, Jesus would be arrested, mocked and beaten, and finally crucified. Yet, here is the victory. Jesus came to save the world from sin. Through the offering of his own innocent body and blood that is exactly what he did.

Today, even in the midst of the COVID-19 turmoil, the victory Jesus won for the sake of God’s people still stands. As we face life in a fallen and broken world, we have the assurance that Jesus did indeed save us. There are no powers that can snatch us from God’s hands. So today, on this Palm Sunday, shout “Hosanna! Blessed is he who comes in the name of the Lord!” For Christ has won the victory for all time. He is worthy of our praise. Hosanna!

Prayer: Blessed are you, O Lord our God, for you have saved your people from sin. Amen.